Andrea Cox was the winner of our competition to meet Andy at his ‘Our Friends Acoustic’ performance at the IndigO2 last week, to have an exclusive preview of the ‘Non-Stop’ album and to interview Andy for this website.

Here’s what happened when Andrea, with her friend Andrew, met Andy Bell backstage before the ‘Our Friends Acoustic’ show to ask him a few questions… 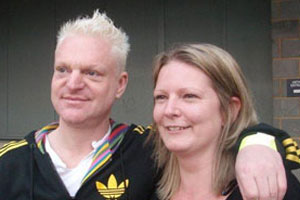 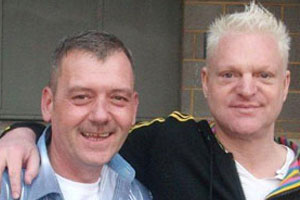 Andrea – Listening to your new album, it’s totally different from anything you’ve done before… where do you find the inspiration to come up with new ideas like that?
ANDY BELL – I’m not really sure to be honest, sometimes it feels like I wring myself out dry and then it takes a long, long time before I can think of anything else, especially when it comes to the lyrics. Because it’s pretty much a dance record then it’s actually easier in some ways. Erasure is very much more melodic with longer notes and things and it’s kind of hard to fit words to them. So I found it quite easy with the lyrics for this one. When it comes to the tunes, it was quite good having Pascal there because he’ll just say yes or no to any ideas, it’s all about what sounds good.

We’ve started work on the new Erasure record already and we’ve got about nineteen ideas for songs, and we do have a few lyrics, we’ve did quite a lot of rough lyrics while Vince was here, but I have to put them on the back-burner and kind of forget about it for a while to start fermenting all the ideas you know?

Andrew – On your fortieth birthday you made a promise to your fans that you’d never stop singing, now that you’re forty-plus do you feel the same way?
Well I’m really pleased with the way it’s going so far but I have been a bit down in the dumps with radio play and stuff like that, and sometimes I do wonder what’s the point, but I think that’s probably true of any creative person, you have peaks and then you go down very low… funnily enough Daniel Miller at Mute said that between the ages of forty and fifty it’s really hard in the music business, but once you reach fifty and get over that threshold then everything seems to be alright again because you’re seen to be a part of the establishment of something like that! Vince is there already and I’ve only got another four years to go!

Andrea – What happens to all your costumes and things after tours? Do you keep them all?
We’ve got a whole lot of stuff in the basement in Spain, a whole lot of stuff from the Phantasamagorial Tour, backing singers and everything… enough for a parade really! But we don’t really look after it very well so there’s kind of a lot of piles of junk! A couple of pieces – the sparkling cowboy outfit and some of the rubber ringmaster outfits – are in the Rock & Roll Hall of Fame in Cleveland but lots of it gets sold off, we give it away for charities and things. I’m not a very nostalgic person really…

Andrew – You’ve done street busking in the past haven’t you? Is that something you still do?
I haven’t done that for ages, not for ages and ages. I have to have someone there with a guitar, but if I see someone with a guitar I might just jump on in!

Andrea – What’s your favourite track on the new album?
I like ‘Slow Release’ because that’s the ballad on the album, and ‘Non-Stop’ because it’s the title track and because it sounds really good on the radio. I also like ‘Say What You Want’ and ‘Touch’… all of them really. I’ve not listened to the album for a while and all the songs are a bit jumbled up in my head!

Andrea – How do you remember all the songs when you’re onstage?
Well I do get stuck sometimes on the lyrics, I do repeat verses and things, or get them the wrong way round… especially on ‘Oh L’Amour’ and songs like that. Sometimes when you do get stuck, or when your mind goes blank, they just kind of come out on their own without really thinking about it. It’s good to let it just flow like that sometimes and not think about it.

Andrea – If you could be a superhero then who would you be and what powers would you have?
Well I would definitely be Wonderwoman because I used to love watching her on the TV and I loved her figure and I liked her lassoo of truth and her invisible plane.

Andrew – If you weren’t with Erasure, or if Erasure had never happened, what sort of career do you think you might have chosen?
I don’t know, hopefully I would have joined a band somewhere along the line, or maybe gone to acting school or something like that, something to do with performance. If all that failed then I’d be working in Debenhams!

Andrea – Do you get nervous before you go onstage?
I do get nervous, I’m nervous now and I was really nervous on the way here. With things like this, that have been planned for so long, you know it’s coming and you’re just waiting and waiting for it. Once it’s out of the way I’ll be fine until I start panicking about the next thing…

Andrew – For the ‘Electric Blue’ album you did a few gigs didn’t you? Are you planning anything like that this time around?
Well there has been talk of doing something… we’re doing the instore in June and I’m quite looking forward to doing some sort of DJ things, where I play music and do vocals over the top of the records… it depends what we come up with really.

Andrew – Whatever happened to Janet Gordon? I bet she can still taste the stamps can’t she?
Janet’s with Shaun at Mute and the kids come round every now and then – Joe and Jonathan – and we go and have pizza and stuff, and she’s really amazing with computers so she comes round and just sorts us out!

Andrea – Is there anyone in the charts today who you really like? Anyone who inspires you?
I love Lady GaGa, I think she’s fantastic. I like Rihanna, I think she’s got an amazing voice… I’m a bit tired of the whole Britney thing, Christina Aguilera things like that. I tend to go for the older artists I suppose, like Whitney Houston and Aretha Franklin, people like that… to be honest I don’t really know many current bands!

Andrew – Do you have ideas about an Erasure tour when that all happens? There’s lots of people around the world who are desperate to see you…
Well originally they were going to release ‘Non-Stop’ in the Spring time, because it was finished last August, and we were hoping to have the Erasure record finished, but it’s all been put back. We were hoping to do a gig at the Hollywood Bowl to kick off the whole thing and hopefully we can still do that next year. Personally I would love to go back to Argentina and Chile and those places in Latin America because they are really amazing places to play. But we are definitely going to go on tour next year and I’m really looking forward to it and Vince is up for it too… we’ve just got to get the record finished first!

Andrea – Have you got any interesting plans for the weekend?
This weekend? I’m not doing anything really, I’ve got a friend coming down tomorrow who I haven’t seen for ages but basically I’ve got a free weekend which is really nice!

Andrew – My favourite Erasure gig was Milton Keynes and I thought you married the audience that night, what did you think of it?
To be honest I didn’t really feel like I was there… we had been to so many places that year and I was in a bit of daze to be honest and I can’t really remember the show at all. To be honest though we couldn’t really believe that we were playing there at all!

Andrea – What’s your favourite sort of food? What do you like to eat?
I love garlic. If ever I’m having a potato or something then I always make my own mayonnaise, you just crush it all up put in a bit of butter – or Benecol now because I’m watching my cholesterol, pretend butter! – put it in the microwave for one minute and you have instant garlic butter! Apart from that I pretty much like anything, I love Italian, I like steak, I like vegetarian food, spicy Indian, Thai… I don’t like Bombay Duck which is dried fish, this Indian dried fish which really stinks… it’s like eating a mummy!

Andrea – How do you spend your free time?
Well really I just go and see friends. I watch a lot of TV, I’m a bit of a couch-potato really. Or I’m on the internet, on iTunes making CDs… going to the theatre, but mostly the music is what takes up my time.

Andrew – How is Vince adapting to fatherhood?
I think he really loves it. He loves being a dad. He told me that he was determined not to let Oscar develop an American accent but I’m not sure how that is panning out! He’s a very proud dad and he says that Oscar has opened his eyes to the world because he thinks everything is amazing, a stone, a tree! I always look forward to seeing him.

Thanks to Andrea, Andrew and Andy