Andy Bell has today been announced as one of the acts for Scotland’s Party At The Palace festival which takes place over the weekend of August 13th and 14th. 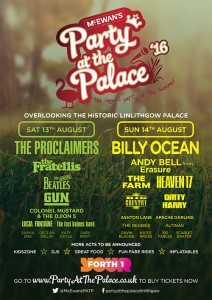 Andy will play on the Sunday bill alongside acts including Billy Ocean, Heaven 17, The Farm and Big Country, while acts on the Saturday will include The proclaimers, The Fratellis and Gun.

More details from the Party At The Palace website.