Andy Bell is among the guests confirmed to appear at two forthcoming BEF (British Electric Foundation) shows in May. The BEF ‘Music of Quality & Distinction Live’ shows will take place at London’s Shepherd’s Bush Empire on May 17th and Sheffield’s O2 Academy on May 18th. Other guests at the shows announced so far include Sandie Shaw, Kim Wilde, Glenn Gregory and Shingai Shinowa.

Tickets for the two shows will go onsale on Friday April 12th at 9am and will be available by calling 0844 477 2000 or booking online via the TICKETWEB website. 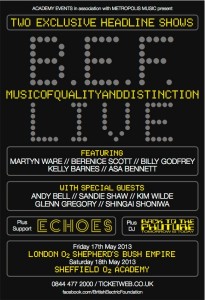 As previously reported Andy Bell also features on the forthcoming BEF album ‘Dark – Music of Quality & Distinction Vol 3’ – performing a cover of Kate Bush’s ‘Breathing’ – which will be released on May 27th and is available to preorder now.