Last year Andy Bell appeared as a special guest of Claudia Brücken at her one-off ‘This Time: It’s Claudia Brücken’ show at London’s Scala. That show – featuring Andy’s duets of ‘Delicious’ and ‘Absolutely Immune’ with Claudia – will be released as a CD/DVD package on July 23rd and you can get more details from Claudia Brücken’s website at the link below.

“The concert is a sensational celebration of Claudia’s life in pop music from Propaganda to OneTwo and features a host of brilliant one off collaborations. The line-up reads like a who’s who of avant pop and includes Ralf Dorper and Susanne Freytag of Propaganda; Paul Humphreys of Onetwo and OMD; Andy Bell of Erasure; Glenn Gregory and Martyn Ware of Heaven 17 and British minimalist composer Andrew Poppy.” 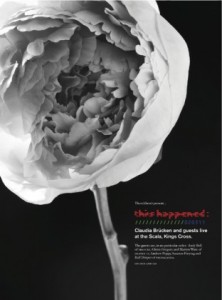