Andy Bell will release an album of songs from ‘Torsten The Beautiful Libertine’, his forthcoming theatre production, on March 4th next year.

From the album press release: “On the album Andy assumes the character of Torsten who has had, over time, many lovers and friends whom ultimately he has outlived. That he himself survives is a bittersweet truth, but it is with an increasingly melancholic emotional distance from people. The new album is a wonderfully evocative exposition of the mind, mirth and mania of an ‘everyman’ who finds himself in extraordinary circumstances. The songs effortlessly combine pop and theatricality in their lush arrangements and Andy’s voice has never been so dramatically expressive.” 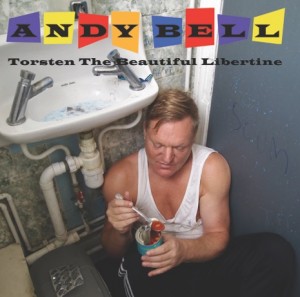 ‘Torsten The Beautiful Libertine’ will be available as a download and also in a limited-edition black vinyl effect CD format presented in mini-gatefold LP style packaging with a twenty page booklet of lyrics and new colour photographs.

Following the album’s release, songs from both Torsten albums will feature in the Andy’s musical stage show ‘Torsten The Beautiful Libertine’ at the Above The Stag Theatre in London throughout March 2016.

TRACKLISTING
Statement Of Intent / Beautiful Libertine / Loitering With Intent / This Town Needs Jesus / The Slums We Loved / Lady Domina Bizarre / (Oooh Baby, You’re So) Queercore! [With Lana Pillay] / BJ4C / I’m Your Lover / Rupert Drinks Vodka / We Were Singing Along To Liza / Photos Of Daniel / I Am The Boy Who Smiled At You / Bond Street Catalogues / My Precious One / To Have And To Hold / Statement Of Intent (Reprise)